Aniplex of America announced at its Sakura-Con panel on Saturday that it is dubbing the anohana: The Flower We Saw That Day television anime series. The company streamed a teaser trailer at the panel, but has not yet announced details on the release. 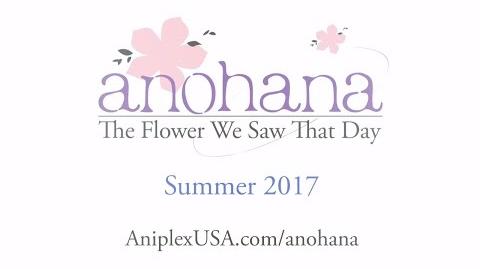 In addition, Aniplex of America announced that it will release the Magi: The Labyrinth of Magic and Magi: The Kingdom of Magic anime on Blu-ray Disc box sets. Both sets will ship on June 27 with a store price of US$119.98. Each will include 25 episodes with Japanese and English audio, the textless opening and closing sequences, and the English trailer.

Patrick Seitz is directing the anohana dub and the cast is as follows:

The 2011 television anime followed several childhood friends who try to reconnect in high school, after drifting apart due to tragedy five years earlier. It inspired a manga, a 2013 film sequel, and a 2015 live-action special.